Banik Ostrava was one of the big names of Czech football – and its Bazaly ground was legendary for passionate, atmospheric support. But a dispute with the local authorities has  seen the first team leave the vintage venue, and Banik, the Miners, have slumped into the second tier. A reserve team game in 2015 was almost the last chance to sample Bazaly before the final bell tolled.

Ostrava, a tough coal-and-steel town in the east of Silesia, is not high on most tourist itineraries. My brother-in-law, a photographer, went there shortly after the fall of the Iron Curtain to shoot a UEFA Cup tie between Banik and Aston Villa … and shuddered at the memory. Like countless similar towns throughout the world, as heavy industry declined the local football team became an ever-more intense focus of civic pride. And when that fails, what then?

At a time when the Czech league was steadily losing its star players to wealthier leagues, and support on the terraces was bleeding into the bars where weekends offered wall-to-wall action from England, Spain, Italy, Germany and beyond, Banik maintained good crowds. Games against the club’s biggest rivals, Sparta Prague, prompted sell-outs and not infrequent outbreaks of violence. The stadium, set in a natural bowl on the hillside above the Ostravice river, was no frills but it was home. And, compared with the previous venue at Stara Strelnice where Banik played on a shale pitch until 1959, it at least had valuable facilities such as grass.

But its days were numbered. On-going issues with crowd trouble raised safety concerns, while the team’s slump in form from being a serious contender in Czech football to languishing around the relegation zone finally dealt the blow to attendances that the dubious attractions of satellite TV never could. The club shop limped on, proudly offering Banik-themed bootees and baby-grows for a new generation of Baniak fans, but the support was dying away.

A reserve team game, played in front of a sparse crowd that rattled around that huge bowl, gave an uncanny presentiment of the collapse that was to come. Late in the 2014-15 season Banik were on their way out of their old. Bazaly’s future was firmly in the past, deemed fit only for youth team action; the first team was destined to move to the home of FK Vitkovice, better known as an international athletics venue. Across town, in the heart of the factory district, next to the ice arena. Part of a separate city-within-a-city under the perceived purview of Vitkovice Steel, the last legacy of Ostrava’s heavy industry.

A reserve game made a fitting epitaph. With so few fans, exploring the ground felt like poking around an archaeological relic: the fanclub bar, promising house specials of roast pork knee, resembled an ancient manuscript; the seat backs, embossed with the club’s name, took on the aspect of an arcane carving. The scoreboard attempted to show a ‘Gol!’ animation, but misfiring electronics garbled the message. The team, struggling at reserve level too, lost 2-1 to Bohemians 1905.

The end of the Czech season soon followed, with Banik’s farewell game at Bazaly and the inevitable protests directed at the city authorities that were blamed for evicting the club. The following campaign was disastrous. On the field the team was rock bottom, ending up demoted for the first time since 1966. Off the field, disaffected fans stayed away. Attendances stagnated, the Vitkovice arena didn’t catch on.

Now both Banik and Bazaly face uncertain futures. While the playing field remains in immaculate condition, the lack of first-team action leaves a void at the heart of the ground. Is the site sustainable as a reserve team facility? Who knows? But the potential loss of this legendary Czech stadium is a sad day football fans – and perhaps a sad indictment of the decline of the once-proud leagues of Central Europe. 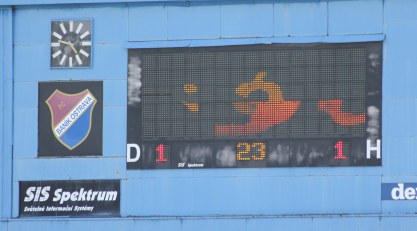 The misfiring scoreboard struggles with a ‘Gol!’ animation.

An advert for the ‘official beer of Banik Ostrava’ on a bus stop next to the stadium. 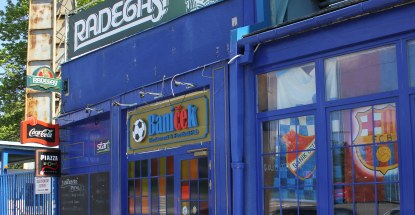 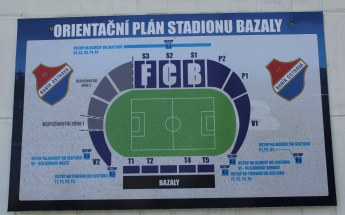 A stadium plan for Bazaly.

The beer hatches at the back of the main stand.