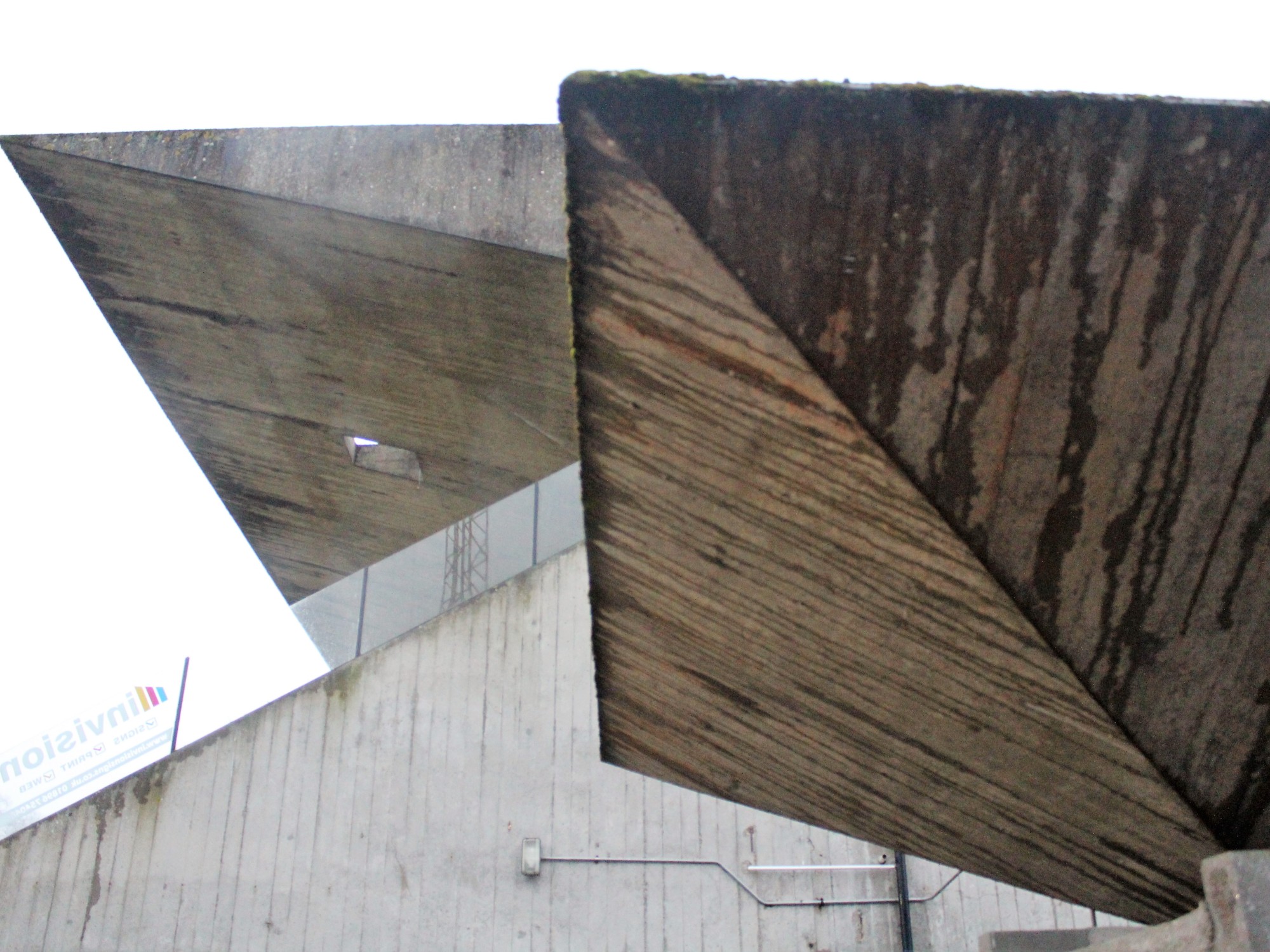 Gala Fairydean, one of the most evocative names of Scottish football, turns out to be more than just a touch of poetry amid the classified results. The team’s Netherdale home features one of the most distinctive stands in Britain, a bold concrete form that enjoys a protected status as an architectural monument.

The jagged, modernist forms were the work of Peter Womersley, a distinguished architect based in the Borders and renowned as one of the finest exponents of the ideas famously developed by the likes of Le Corbusier and Frank Lloyd Wright. In partnership with Ove Arup, the Danish engineer behind many iconic structures of the 50s and 60s, he created a unique solution to the problem of designing a stand. Using cantilevered concrete to build a ‘hinged’ structure, Womersley was able to do away with any pillars, ensuring an uninterrupted view of the field of play from a building that immediately grabs attention. Alongside the stand, two turnstile blocks are topped with curious concrete ‘umbrellas’ that seem to float alongside the main structure. The stark geometric lines reflect the influence of the constructivists, the overall appearance evokes the Warsaw Pact rather more strongly than the Scottish Borders.

When it opened in 1964 – baptised with a glamour friendly against East Fife and a crowd-pleasing 4-2 home win – the interior fittings attracted attention as well. After decades of rudimentary facilities, modernity was now more than skin deep. The Border Telegraph of the day reported: “The interior of the building provides accommodation for four teams. The Fairydean and their visitors will each have a changing room adjacent to showers and plunge baths and each room is equipped with twelve lockers for the players’ personal belongings. The other two dressing rooms will be used by Gala Rovers when they are using the pitch. Other accommodation includes a room for the referee, a trainer’s room and a club room measuring 30 feet by 15 feet with glass walls on two sides overlooking the playing area and the rear of the stand.” Today, visitors can still see the interior by popping into the bar, a cosier proposition than its stark outlines.

As a style, modernism divides opinions. Brutal or brilliant, carbuncle or classic. And there was a good old stromash back in 2006 when Historic Scotland made the 1963 stand a listed building, rating it as one of the most significant in the Borders. The Daily Record described it as ‘like something from the Soviet Union’, and wasn’t being complimentary. A campaigner was quoted in the same paper suggesting that the decision beggared belief. “We lost a very attractive sandstone building – the original textiles college in the Borders – to make way for a supermarket,” said Tom Douglas of Borders Heritage at Risk. “And yet we are pulling out all the stops to preserve this concrete stand which, with all due respect to Gala Fairydean, is not the most pleasing on the eye.”

Even the club chairman at the time, Simon Gillie admitted that there was a love-hate relationship with the building – but added that they should be proud of having the largest football stand in the rugby-mad Borders. Next door, Gala RFC plays in front of a more traditional stand and World Cup rugby has been staged here.

The danger, of course, is that the stand’s protected status will cause as many problems as it brings opportunities. The sorry tale of Billingham Synthonia, forced to abandon an historic home and now struggling on and off the field, shows all of the potential pitfalls here. On the plus side, heritage status can attract addition funding to preserve and maintain the stand – something not available to every club.

It’s not just a historic stand: Netherdale, now known as the 3G Arena, also installed the first 3G playing surface in the Borders. As well as ensuring game’s like Saturday’s clash with East Stirlingshire survived a damp and dreary day, it also solved the unlikely problem of an infestation of rabbits digging up the old grass pitch. But neither distinctive concrete architecture nor a state-of-the-art playing field could redeem a Lowland League fixture that matched the bleak February weather. The Shire, the first and so far only team to be relegated from the Scottish League via its playoff system, prefer to talk up the days when a young Alex Ferguson got his start in management at Firs Park. But Fergie would have struggled to get much of a game out of either of these sides amid a parade of misplaced passes and ill-advised dribbles.

Until the closing moments, it seemed that the most notable moment would involve a player losing possession after tangling with the corner flag. Then came East Stirling’s winner: Andy Rodgers, a combative forward who recently became his club’s record post-war goalscorer, had spent much of the second half grappling with his own frustration as Shire huffed and puffed without finding any kind of penetration. Then his mishit shot dropped perfectly for strike partner Andy Sludden to fire home the only goal. Like the rest of the game, it wasn’t a classic; this time, the architecture took top billing.