Washington FC is a team with a long history: miners from Washington ‘F’ Pit had a team – Washington Colliery – from the early 20th century. Little is known about that club, but the story of Jimmy Hagan stands out. A future England international, he went on to manage Benfica to Portuguese titles in the 1970s, another famous footballing export from the North East in common with Billy Charnock in Russia or Jack Greenwell’s journey from Crook to Barcelona.

The modern club, though, was founded in 1947. Soon, the development of Washington new town, a maze for motorists but a fast-growing community, promised a new audience. It didn’t quite work out like that, and the modern-day Washington is struggling at the wrong end of the Northern League. Its former home at Albany Park stands empty, the team has moved out to Nissan; dug out of the mines, this community is now driven by a Japanese car plant.

My only previous visit to Albany Park was back in the 1997-98 season. At that time Washington were having a horrible time of it in the Northern League. Rock bottom of the second division with just one win all season, they conceded 153 goals in 36 games. An unprepossessing Durham Challenge Cup tie against Hartlepool BWOB (now simply Hartlepool FC) of the Wearside League didn’t show off the ground at its best: cold, bleak, sparsely populated.

And that was often the problem. Although set in a residential area and able to run the clubhouse as a seven-days-a-week community facility, the team never captured the local imagination in a town where the residents had moved from Tyneside or Wearside and brought their own footballing loyalties with them. Loved by a dedicated committee, largely ignored by most, the ground faced an on-going battle with vandals.

That battle was ultimately lost. A devastating fire in 2009 destroyed the dressing rooms – and most of the kit, laid out in preparation for a game the following day. Forced to groundshare, the team ultimately made a permanent move to the Nissan Sports Complex. The old ground continued to host youth and Sunday football, using adapted shipping containers for makeshift dressing rooms, but now stands idle, it’s ample clubhouse boarded up.

Oddities remain: a main stand constructed, in part, out of the kind of panel doors you might find in a house. A curious wooden seated area outside the old clubhouse, red paint now faded and chipped, resembles a beer garden more than a football ground. Elsewhere, tell-tale scorch marks and smashed-up electronics indicate how much work would be needed to get the ground back into action. Following Washington’s merger with a local youth team at the end of the 2016-17 season, the need for a second pitch has disappeared. It might not be long before Albany Park is also gone, while Washington’s remaining followers travel to the town’s hinterland for home games. 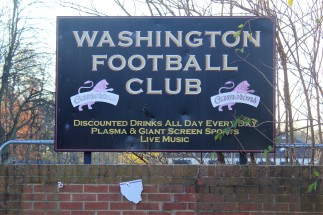 A promise of better things once on offer at Albany Park.

A forgotten advertising hoarding behind one of the goals at Albany Park.

A floodlight pylon at Albany Park.

Dugouts and a temporary changing room at Albany Park. 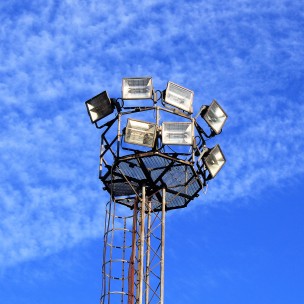 A floodlight at Albany Park.

2 thoughts on “The remains of Albany Park”