It might have been the single coldest game I saw in Russia. A Friday night at the Yantar Stadium to see Strogino play Solaris in the third tier of the country’s pro leagues, amid a fluttering of snow. Around Europe, teams at this level include the likes of Sunderland and Portsmouth in England, Kaiserslautern and 1860 Munich in Germany, and Spain’s Racing Santander, none of whom are strangers to five-figure crowds. In Russia, not even the lure of free entry could persuade more than 300 people to brave the October chill for this one. Even the bored cop listlessly checking people’s bags as they came in seemed underwhelmed by the occasion.

It was easy to see why. For many groundhoppers, this kind of game represents the nadir. There’s nothing wrong with the Yantar Stadium (‘yantar’ is the Russian word for ‘amber’, reflected in Strogino’s yellow shirts), but it’s hard to see it as a hidden gem. It’s a long metro ride out into Moscow’s north-western suburbs to one of those high-rise dormitory regions that feel utterly lifeless after dark. Considering that Moscow winters aren’t noted for their glowing, luminous evenings, that’s a lot of lifeless. The ground itself is basic: the pitch is in a shallow bowl with uncovered seating, decorated by a dusting of snow (this ended up on the front cover of my Russian football e-book, ‘Snow on the Seats’). Needless to say, no programme and no sign of a team sheet. In fact, not much information about anything. If you didn’t know the game was on, you’d never guess by strolling past the pitch. As for the surroundings, one side is dominated by those tower blocks; behind one end a giant indoor training centre bubbles up like an artificial biosphere on an alien world. A running track, almost obligatory in Russia, spoils the view of the game. There’s not much to linger in the memory, no faux classical details or ageing Soviet sculpture. The only oddity was an English-language ‘No Smoking’ sign. As a local sports facility, it’s good: the kind of public space that gives kids a chance to actually play the game on a field rather than a computer. As a place to watch the action in the PFL West, it’s uninspiring.

Strogino were in their second season in the professional game. Previously, as amateurs, the club played adult football from 2010 before stepping up a level for the 2013-14 season. That debut was solid, but unspectacular; the follow-up campaign was more impressive. The team took third place, behind Spartak II and Zenit II and just ahead of former Premier League outfit Khimki. Tonight’s opposition, FC Solaris, were newly formed and playing out a debut campaign. Their trajectory would mirror Strogino’s: mid-table, followed by third place – a position secured under the guidance of head coach Andrei Kanchelskis. But Solaris would burn out at the end of just their third season and the club was disbanded in the summer of 2017.

The game displayed energy levels similar to that listless cop. A solitary goal from Alexander Burdanov arrived with the snow to win it for the hosts just after half time. Burdanov, a straw-haired midfielder, had a taste of Premier League experience early in his career with Krylya Sovietov but his career never took off. Drifting to the third tier via a short, inactive spell at Volga Nizhny Novgorod, he spent five seasons with four clubs before leaving the pro ranks in 2016 after 77 appearances (47 as sub) since his debut in 2010. His story is hardly unusual: early retirement seems to be the norm for players at this level, once the dream of making it to the top comes to an end. Enthusiasm is quickly sapped by low wages and long journeys – in this season, Strogino would make a 450-mile trip to Pskov, go 248 miles to Smolensk and head off to Kostroma and Ivanovo, both about 200 miles away. Playing in front of crowds of 300, with gate receipts of zero. The chill was not solely due to the weather; compared with other European leagues, the cold wind of indifference blew strong here.

Action as Strogino (yellow) take on Solaris in October 2014. 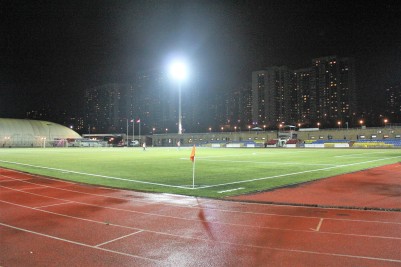 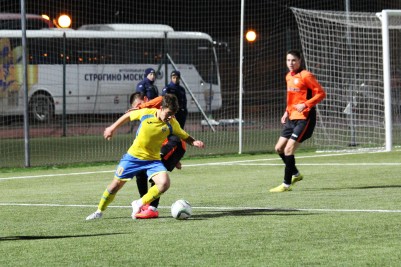 Action as Strogino (yellow) take on Solaris in October 2014.