Sometimes, it takes a bit of imagination to get the most out of a ground. Borough Park, home of Workington AFC since the 1930s, once hosted league football. At its peak, 20,000 fans squeezed in to see Manchester United’s Busby Babes, pre-Munich, win an FA Cup tie thanks to a Dennis Viollet hat-trick. Today, though, it’s about piecing together the clues of what was once there.

Floodlight pylons, still present in 2013 although no longer in use by then, have been taken down. A few lengths of metal in the corner of the covered terrace are all that’s left – one-time illumination maintained as extra roof support. The old main stand, once an impressive wooden affair, is long gone: the west side of the ground retains dressing rooms, dug-outs and the club bar, but they are in an odd-shaped building, raked roof and low brick walls. That’s pretty much all that remains after the wooden stand was removed for safety reasons following the Bradford fire in 1985. The covered terrace opposite became the de facto main stand, with seats installed to create an upper tier. Old-timers still congregate at the back, behind boards with WAFC painted in bold capitals. To the left, the south terrace has a corrugated iron shelter from the elements; between the goalline and the river Derwent, a fine open terrace. What a joy that must have been in the days of Busby, or the derby day visits of Carlisle or Barrow on Football League duty.

Joy isn’t so easy to find in Workington now. It’s more than 40 years since the club dropped out of the league, failing to secure re-election in 1977 after an extended but largely undistinguished stay. All but three of their 26 seasons were spent in the lowest division; fifth place in Division 3 was as good as it got. Despite that lack of success, one name resonates. Bill Shankly, later the genius of Anfield, cut his managerial teeth here in 1954; like Brian Clough at Hartlepool, this was a giant of the game who learned his trade among the minnows by leading a perennial struggler away from the re-election places.

Shankly’s famous ‘matter of life or death’ quote adorns the wall of the bar, although it has been renamed in honour of Tony Hopper, a former Carlisle and Workington midfielder who died last year at the age of 42 after being diagnosed with Motor Neurone Disease. Hopper now holds the possibly unique distinction of replacing the Liverpool legend in popular affection, albeit at a very localised level. Next to it, blueprints show plans for a new, contemporary arena in Workington, due to be built on the current Borough Park site. Next season, it’s likely that the Reds will be playing a few hundred metres away on the other side of the supermarket car park. The floodlights of Derwent Park, home of Workington Town RLFC, are visible from the football ground; the plan is to put the two teams into a groundshare while work progresses.

The touchline that Shankly once prowled seems likely to be lost at the end of this season.Long-standing wrangles over a soon-to-expire lease remain unresolved, and the local authority has submitted plans to demolish the ground and press on with the new development. The sudden rush is down to the 2021 Rugby League World Cup: Workington is set to host games and Allerdale Borough Council wants a shiny new arena to showcase the region to the world. At the football club, feelings are very mixed. The ground is showing its age, the club’s website admits that it can be a struggle to maintain an antiquated stadium but also notes a determination to stay and improve facilities at the Reds’ traditional home. There’s opposition within the council as well: some fear the new stadium will benefit Workington to the detriment of sport in the wider region, others claim that councillors are being railroaded into a hasty decision before local elections in May. The local paper reports on club shareholders demanding greater clarity about what the future holds.

Off-field worries are matched by problems on the pitch. Despite a run of three straight wins, Workington are second bottom of the Evo-Stik Premier and relegation is all-too-real a possibility. Improved form since the turn of the year had fans talking of the ‘Great Escape’ but this was a day when nothing would go right for the Reds.

Basford United, first-time visitors to this stretch of the Cumbrian coast, often played like a relegation-threatened team. Cautious from the off, and ever more defensive after Shaun Harrad’s penalty gave them a 13th-minute lead, they stuck to a ‘what we have, we hold’ philosophy and relied on a clutch of finger-tip saves from goalie Saul Deeney to keep them in the game. Deeney once famously defied Manchester United in an FA Cup tie with Burton, 13 years on he showed that he still had it. Midway through the second half, a poor punch from home keeper Aaron Taylor gifted a second and a profound silence fell on the ground. A brief roar from the visiting dug-out faded, the home fans remained stunned. There was not even a defiant rallying cry. Four minutes later, it was 3-0 and visiting manager Martin Carruthers, who had earlier strained home sympathies during a touchline spat, danced along the touchline once again to be greeted by a shower of beer from the terraces. With games running out, and difficult fixtures against high-flying promotion chasing Warrington Town, Farsley and South Shields coming up in the next few weeks, this defeat was a barbed-wire fence in the path of that Great Escape; the future of Borough Park seems similarly perilous

Action as Workington (Red) take on Basford Utd in the Evo-Stik Premier League.

The last remains of one of Borough Park’s floodlight pylons.

Fingers pointed on the touchline as Workington take on Basford United. 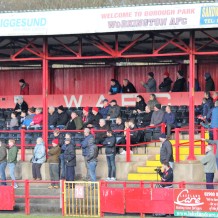 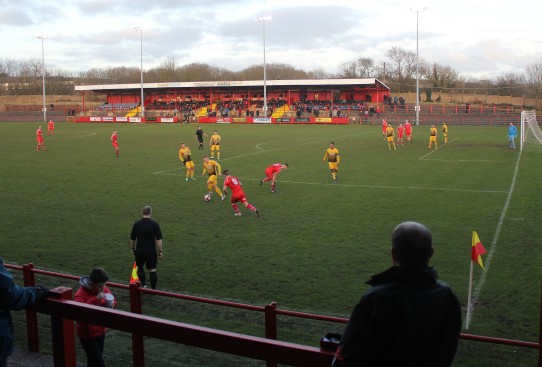 Borough Park, Workington, on a matchday.

Tempers flare on the touchline as Workington (red) take on Basford Utd in the Evo-Stik Premier League. 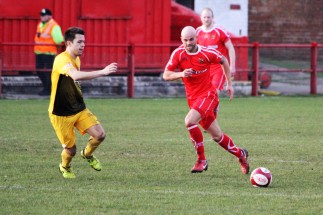 Action as Workington (Red) take on Basford Utd in the Evo-Stik Premier League.

One thought on “Football archaeology”