Milton Keynes gets a bad press. Long before it stood accused of stealing someone else’s football team, the sprawling new town was a nationally-recognised shorthand for suburban tedium and everyday mediocrity. Never mind that hardly anyone opining about it had actually been, the whole notion seemed to be the antithesis of what a town should be.

Logically, then, a town without roots acquires a football club without roots. Or rather, a football club uprooted. And at first sight, there’s much to dislike about MK Dons, even without the club’s controversial birth, ripped from South London to seek the sunlit uplands of life in leafy Buckinghamshire. For a start, there’s that logo. The stylised shield, comprised of an ‘M’ and a rotated ‘K’ looks like it might have been ripped from a cable TV channel; the sheer pretention of putting the club’s foundation date – 2004 – in roman numerals just looks ridiculous.

Then there’s the stadium, designed to include everything a football fan would hate. Out of town location? Check. Built-in hotel? Check. Adjacent shopping centre? Check. A design so uniform it becomes sterile? Check, to the point that you sense asymmetrical advertising boards might trigger OCD in more sensitive fans. To rub it in, Stadium MK’s 30,000 capacity is rarely needed; designed for a Premier League future that seems unlikely to arrive, many of those padded seats never feel the crush of beery buttocks from one season to the next. It’s very different from the blog’s previous tick, at Stockport County. This is the kind of stadium that appeals to people whose matchday routine involves the café at Marks & Spencer (I know, I was there, urgently seeking Wifi away from the usual post-match crush).

But is it really as bad as it seems? Well, yes and no. For the first half of Saturday’s game against Sunderland, it was pretty tiresome. The game was sluggish. Sunderland, aware of the Dons’ recent improvements, held off on the high-intensity pressing game that has transformed Phil Parkinson from zero to hero in impressively quick time. With a big travelling support, we had the unlikely spectacle of an away team delivering a performance that quietened the fervour of its own fans.

The home fans were predictably quiet. They had about two-thirds of the 13,000 or so in attendance, but there’s still a feeling that for many, MK Dons is a second team, a local alternative to whichever club is in your blood. However, it may be changing. A banner in the home end reading ‘We are the light that never went out’ offers a different slant on the argument that this is Franchise FC, corroding the soul of the beautiful game. Half-time birthday greetings introduce a generation of kids who have grown up with league football in their town; without it, would they merely follow Liverpool or Man. City from their sofas, regarding the game as a TV entertainment?

However, when the game improved in the second half, so did the atmosphere. Sunderland rediscovered the assurance of recent weeks and piled on the pressure. The 4,500 visiting fans responded by raising the volume until the explosion of joy occasioned by Lyndon Gooch’s 79th minute winner. The northeast corner of the stadium turned into a broiling sea of Red-and-White, a mass of jubilantly flailing limbs. There was even a smoke bomb that evaded the sniffer dogs and made a triumphant flight to the touchline. Fans spilled joyously onto the grass, embracing the players. In the upper tier, amid slightly calmer scenes, a touching moment as a dad skyped his little boy back home to show him the celebrations.

In short, there was an atmosphere. The game produced its unforgettable moment, another goal we’ll talk about in terms of ‘I was there’. After 80 fairly frustrating minutes, that split second that reminds us why we do this, week in, week out, up and down the country in search of something better than everyday mediocrity. And, sometimes, finding, in places like Milton Keynes where a supposedly soulless bowl suddenly found a bit of football’s soul.

Banners in the Sunderland end at Stadium MK.

Stadium MK as viewed across the retail park carpark. 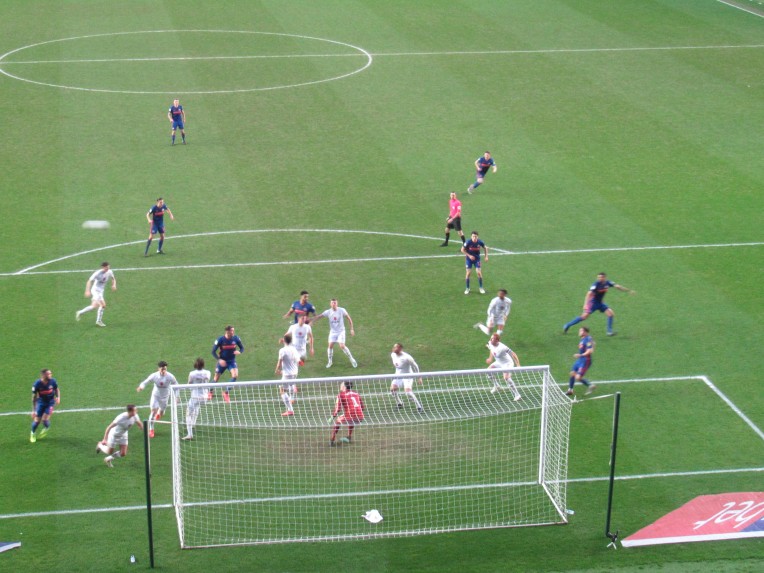 Sunderland (blue) on the attack at Milton Keynes.