My groundhopping career got started in earnest when I was a trainee journalist in Glasgow. Having my own car, relatively few demands on my time at the weekend and a wealth of new grounds to explore across the Central Belt of Scotland meant new ticks on a regular basis and a chance to see teams I’d barely heard of before. Cambuslang Rangers was one of them. 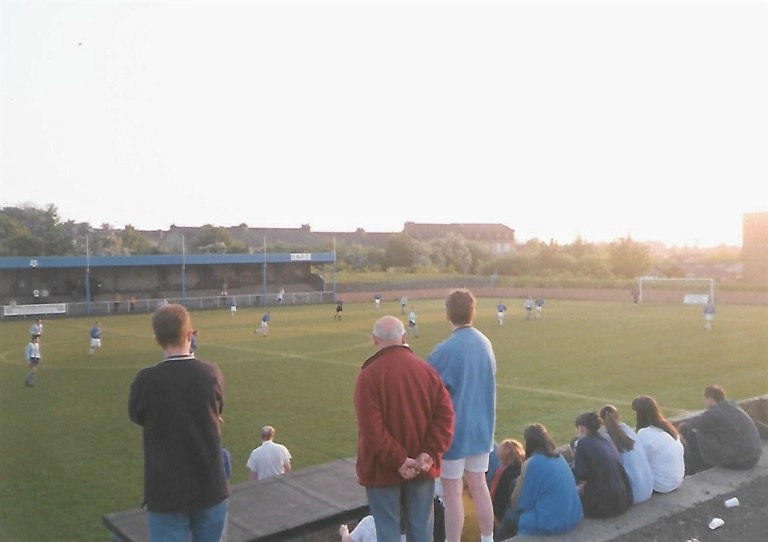 Unusually, I had my camera with me. Back in 1999, this was an actual film camera (remember them?) and it needed a bit of patience (remember that?) to get to the end of the film and get the images processed. Younger readers may not believe me, but at this time it wasn’t deemed essential to record every waking moment for posterity, so it could take months to rattle off 20-odd snaps. Part of the fun of processing a film was discovering just what the hell might be on it. I don’t know why I decided to take some photos at a junior football game. I suspect I needed images to illustrate a story I was working on and picked a fixture at random from the list in the local paper (remember that?). Plotting a route in the A-to-Z (remember that?) saw me driving past Ibrox and the Shawfield dog track, once home of Clyde, on my way from leafy Jordanhill to Somervell Park.

This wasn’t the ‘Lang’s first home. Founded in 1899, the club apparently started out at Westburn Park. Enticingly, just to the north, there’s the promise of a curling pond; a popular Scottish sport that’s largely off the map now, save for a week every four years when the Winter Olympics comes around and this game of frozen billiards becomes a fleeting cult. Westburn Park is now a housing estate, tucked between the railway line and the Westburn Road, but it was once the heartbeat of football in Victorian Cambuslang. The Rangers were the third team to call it home, after Cambuslang FC and Cambuslang Hibernian. The former crossed the tracks to the nearby Whitefield ground and became a founder member of the Scottish League; Whitefield was the venue for the first hat-trick in the league, scored by Rangers’ John McPherson on Aug. 23, 1890, a week after Cambuslang opened its campaign with an 8-2 gubbing of Vale of Leven.

By the time the Rangers were formed in 1899, Cambuslang FC was no more. The Hibs continued into the 20th century, but Rangers emerged as the top team in town. In 1904, Somervell Park was open for business and it’s been home to the club ever since. Like a lot of the big old Scottish junior grounds, it’s long on expansive terracing and short on frills. One covered stand, a pavilion for the teams to change and an adjacent bar pretty much completes the facilities on offer; as a ground, it calls to mind the old Tinto Park, home of Benburb, visited earlier that season for a dreary 0-0.

In the days when fans could be crammed in, it managed a reported attendance of 13,500. The club was at its peak in the early 70s, dominating the prestigious Scottish Junior Cup and claiming the Central League title in four straight series. From 1969 to 1974, Rangers played in five of six Junior Cup finals, winning four of them. There were also a couple of West of Scotland Cup successes in that era, as well as League Cup triumphs, to complete a rollcall of success that saw Cambuslang named as the Scottish Junior FA’s Team of the Century.

But a sunny May evening as the century drew to an end was a far cry from the glory days. Rangers attracted a few dozen die-hards for an end-of-season affair against Arthurlie. A 2-4 defeat reflected a season that was petering out for the hosts. So far, I haven’t made it back to Cambuslang; other blogs suggest the ground has changed little while the team has endured tough times in the 21st century. With the future of junior football dominated by the planned new West of Scotland League – plugging into the senior Scottish pyramid and offering a theoretical journey to the Premiership – it’s far from clear what another trip here would bring. For now, for me, Cambuslang remains a handful of faded photographs. 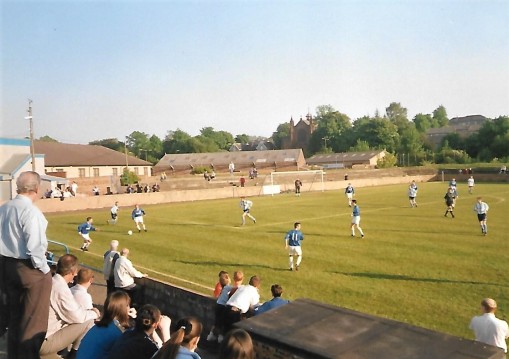